You are here: Home / Health / Medicine / Expert says poinsettias not as dangerous as people think 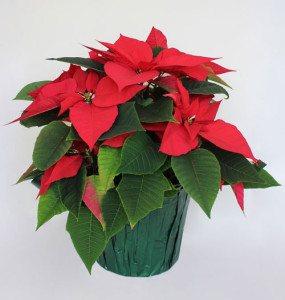 Some Iowans may be paranoid about having poinsettias in the house as they’ve heard those red-and-green flowers traditionally associated with Christmas can be deadly poisonous if eaten. Tammy Noble, a registered nurse and the education coordinator for the Iowa Poison Control Center, says that myth is busted.

Poinsettias over the years have gotten a bad rap,” Noble says. “Their reputation is being horrible even though they’re a beautiful plant, but they’re not as toxic as people may have been led to believe.” One study finds a child would have to eat as many as 500 poinsettia leaves to become poisoned, but aside from that, the leaves taste terrible so no one would likely ever eat a lethal dose of them.

Still, Noble says you may want to use caution around the plant. “If you swallow some of the leaves or chewing on the leaves may cause an upset stomach but it’s not something that we find too hazardous,” according to Noble. Other plants that may appear in your house during the year-end holidays could pose a more significant threat, according to Noble, and you need to take care with them.

“People will sometimes have things like holly berries or mistletoe in the house,” Noble says. “Those berries on those plants can be poisonous. Anytime you have someone that eats those berries, please do call the poison center because those are a big concern.” The Sioux City-based Iowa Poison Control Center is available around-the-clock at 800-222-1222.

The poinsettia is native to Mexico and dates back centuries to when the Aztecs cultivated them to be more like trees that grew to be ten feet high. Seventeenth-century Franciscan priests in Mexico used poinsettias in nativity processions, the first recorded use for a Christmas celebration, though they weren’t called poinsettias then. That didn’t come until Joel Robert Poinsette introduced the plant to the U.S. in 1825 while he was the U.S. Ambassador to Mexico. The plants were later named to honor him.