You are here: Home / Sports / Hawkeyes rested, now ready to get to California for Rose Bowl 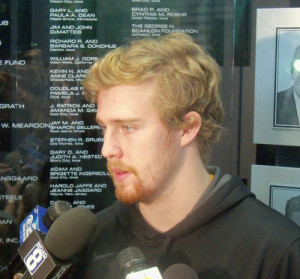 The Iowa Hawkeyes had some time off before resuming practice in Iowa City for the Rose Bowl game against Stanford. For some players, like quarterback C.J. Beathard, it was a welcome break.

“It’s been a good time to kind of relax and kind of look back on the season…look back at what we accomplished this season, we did a lot of good things this season. It’s a tribute to the guys and how hard they worked this season. We are excited for this Rose Bowl game, we are excited to get out there to Pasadena,” Beathard says.

Beathard has had nagging injuries throughout the season and says the rest has helped. He says the first week off was like rest week for him, but now they have turned their focus to Stanford. The quarterback says the healing process continues and he is still recovering and getting better each and every day.

Iowa leaves for California Thursday, and Beathard says the focus on the football game will get stronger, even with all the other things going on. “A lot of activities and distractions out there…those are the goods things that’s a result of having a good season and a result of going to the Rose Bowl,” Beathard says. “You’ve got to enjoy that, you’ve got to embrace it, but we’ve also got to stay focused and maintain the task at hand.” 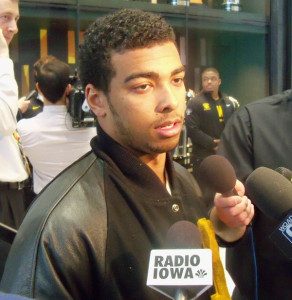 Senior running back Jordan Canzeri got injured again in the Big Ten title game, but is confident he can play in Pasadena. “It’s been great, my ankle feels great, I am definitely ready to go, and I will be. I have a lot of work to put in before then, but I’ll be ready,” Canzeri says.

Finishing his Hawkeye career on the field in a bowl game — not the sideline — has been motivation. “An experience like this is something you don’t want to just let go,” Canzeri says. “It was extra motivation in rehab, and I am just glad that I am ready now.”

Iowa fought to get respect all season long despite a 12-0 regular season record. Canzeri says that’s till the case as they play in the bowl game. “We just within ourselves have that internal motivation to win this game — so it doesn’t matter what people say negatively or positively,” according to Canzeri. “For us, we know that we just want to end this season on a positive note with a win. We want to build on the rich legacy of this program and build on the season that we’ve had with a win, so that’s just the most important thing right now.”

Senior wide receiver Tevaun Smith says the older members of the team know the importance of preparing for the game. He says they can have fun and it will be exciting for players,”But the older guys know what we have at stake and are going to work hard out in California and be ready for Stanford.” Smith says they understand the history of the Rose Bowl, but that doesn’t change how they get ready.

“We recognize it’s the granddaddy of them all, but then again, it’s just like any game. We are going to come in and we are not going to practice any different, we are going to do the same thing we do during the season and work hard,” Smith says. Iowa faces Stanford in the Rose Bowl on New Year’s Day.