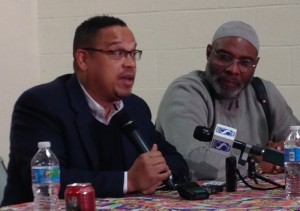 Four Iowa religious leaders joined a Minnesota congressman today at the Muslim Community Center in Des Moines to call for a “rebirth” of religious tolerance in America.

Congressman Keith Ellison, a Democrat from Minneapolis, is the first Muslim elected to the U.S. House of Representatives and he is in Iowa today to campaign for Democratic presidential candidate Bernie Sanders. He said the country is in danger of veering in an “ugly direction” because of calls to bar Muslims from entering the country.

“We’re making a moral appeal to unity,” Ellison said. “We’re calling upon faith leaders of all descriptions and all backgrounds to say: ‘We can debate taxes, we can debate public spending, we can debate how we address issues of the environment, but in terms of who belongs, well, we’re not going to debate that. Everyone does.'”

State Representative Ako Abdul-Samad, a Democrat from Des Moines, is a Muslim imam or prayer leader. He said candidates like Donald Trump and Ted Cruz are saying “negative things” that are “perpetuating division” in America.

“We must come together and join hands across this nation and this world as a human family so our children will be able to grow up in a peaceful nation,” Abdul-Samad said.

Pastor Frantz Whitfield of the Mount Carmel Baptist Church in Waterloo said the country’s “identity” is in danger.

Steven Edelman, the rabbi at the Tifereth Israel Jewish Synagogue in Des Moines, said he was there to express “solidarity” with his Muslim neighbors and other religious minorities in Iowa.

“I believe that religious diversity is one of the greatest strengths of our community,” Edelman-Blank said. “The negative singling out of one group degrades public discourse. It injures all of us as it seeks to pull us apart.”

Alfaro-Santiz said he was not comfortable calling for religious “tolerance”, however.

Congressman Ellison urged the crowd to reject inflammatory labels like “radical Islam.” Ellison suggested it’s similar to stereotyping the Irish as “drunken” and blacks as “criminal.”