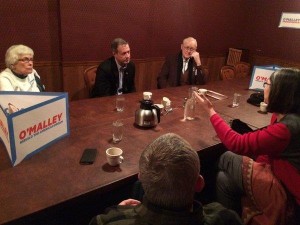 Six presidential candidates — two Democrats and four Republicans — are campaigning in Iowa today, but Martin O’Malley had the campaign trail all to himself Monday due to the storm.

O’Malley traveled to Webster City, Iowa Falls, Waterloo and Tama and the former Maryland governor admits at some points he was unable to see the road. O’Malley depended on the native Iowan who was driving to keep them out of the ditch.

“Neither rain, nor sleet, nor snow could keep us from making our schedule,” O’Malley said, “so we saw a lot of good people and I hope to meet even more today as we enter into the ‘decision pocket’ here before the Iowa Caucuses.”

O’Malley is campaigning in Jefferson and Fort Dodge this evening. O’Malley’s last stop yesterday was in Tama, at 8 p.m., where he met with one person for about an hour. Chris Christie had planned on campaigning in Dubuque and Davenport on Monday, but had to cancel those events because of the weather. The New Jersey governor joked about his travel woes with a crowd at the Hamburg Inn in Iowa City today.

“I had the great delight of driving from O’Hare yesterday to Davenport. I will tell you the weather was much worse in Illinois,” Christie said, to laughter.

Christie and Marco Rubio have been campaigning in eastern Iowa today. Bernie Sanders will arrive late this afternoon for events in Muscatine and Davenport. Donald Trump will hold a rally this evening in Council Bluffs. Rick Santorum will be campaigning in central Iowa tonight.