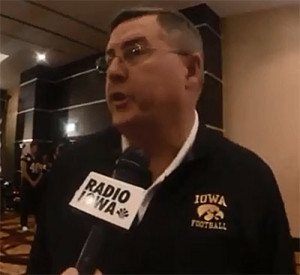 The Hawkeyes and the Stanford Cardinal will go over their final game plans one more time today in preparation for the Rose Bowl matchup Friday.

Iowa offensive coordinator Greg Davis says they like to have almost everything in the game plan before they leave Iowa City and then use the time on site to tweak it.

“I think preparation has gone well,” he says. Even though both teams are near Hollywood, don’t expect a movie type script where the Hawkeyes install an entirely new offense to surprise Stanford. And Davis says Stanford won’t do that either, as both teams will refine the things that work well for them already.

He says they may do something they haven’t done a lot of this season because it works better against the Stanford defense. “But basically your offense and your defense that has gotten you to this point, that is what you are going to do.”

Davis says bowl games present a unique circumstance for teams. “Because teams have been away from the weekly grind, special teams play becomes really important,” Davis says. “And then also, ball security, because our backs have been basically now a month since they have really been tackled. So, you always worry about ball security. And especially early in the game –reacting to the speed of the game — because you can only do so much in practice to simulate that.”

Davis says the Cardinal do offer a different look for his offense. He says they use four linebackers through most of the game and put them in different fronts and they have to be aware of that so the offensive line can adjust.  That means quarterback C.J. Beathard will also have to be aware of it to get them into the right play.

Senior Blake Martinez is one of the linebackers for Stanford. He knows they will have to work hard against Iowa. “I think their key component is their offensive line…it seems they all work together as a well-oiled machine,” Martinez says.

Martinez says he noticed right away that Beathard is a great quarterback who can throw the ball, and also make things happen by scrambling. Iowa uses several different running backs, and Martinez says you can’t learn everything about each one. He says you just have to prepare for what Iowa does on offense and play football.

The Iowa tight ends are another weapon for Stanford to worry about. “For me at least since I’m a linebacker, I will be covering those guys, and they’re really good. They are probably the best we’ve faced all season, and I am ready for the competition,” Martinez says. Iowa and Stanford kick it off Friday at 4:10 Iowa time.