You are here: Home / Sports / Iowa’s Koehn ready to kick from the Rose Bowl grass (video) 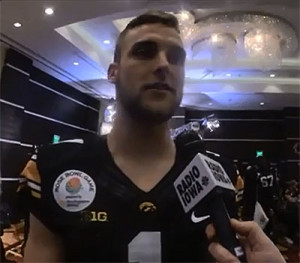 Many are predicting tomorrow’s Rose Bowl game will be a close one that could turn on one or two plays.

Hawkeye kicker Marshall Koehn has been a key figure as Iowa played a lot of close games this season — and he came through in the clutch with a 57-yard field goal as time expired to beat Pittsburgh on September 19th.

The Rose Bowl stadium provides a new environment and grass surface to kick from, but he’s says that shouldn’t be a factor if he’s called on late in the game as he has heard it’s a great place to play. He says kicking off the grass doesn’t require a lot of adjustment. “You know you can catch a little more ground on the grass than the turf, but it’s really not too different.”

Koehn, who is from Solon,  says he’ll be ready to go if he’s needed, “Definitely, I am always ready, I have a routine I go through during the game and I’ll be ready if my number is called… as a unit we feel confident that we’ll go out and execute.”

Stanford quarterback Kevin Hogan has played in the Rose Bowl before and could be called upon to lead a last-second drive. If that’s the case, he says he has confidence his offense can get it done against the Hawkeye defense. “It’s definitely a challenge where you have to not necessarily looking for stuff presnap. But after the ball is snapped you’ve got to see what they are doing. So, it’s going to be a lot of post-snap reads, a lot of adjustments after the ball is snapped.”

Many teams stay away from Hawkeye All-American defensive back Desmond King, but Hogan says that’s not something he is thinking about. “I wouldn’t say it’s too much of a factor — I mean he’s a great player, he’s definitely a great player — but we are not going to shy away from him, we are going to go through our reads, go through our progressions,” Hogan says. “They haven’t seen a receiving corps like ours all year. And so, it’s going to be an exciting challenge.”

Kickoff for the Rose Bowl is 4:10 Iowa time Friday.