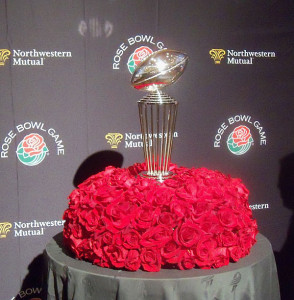 The New Year begins with the Iowa Hawkeye’s first appearance in the Rose Bowl in 25 years.

Iowa coach Kirk Ferentz and the rest of the team have been in California since Christmas Eve preparing for this game. He was asked this week about the long drought since the Hawkeyes have played in this game.

Ferentz says it is a bit of a factor, but says the team has played in a lot of big games, especially this season. Thousands of Hawkeye fans started pouring in around midweek, and there’s expected to be a healthy amount of black and gold in the stadium. 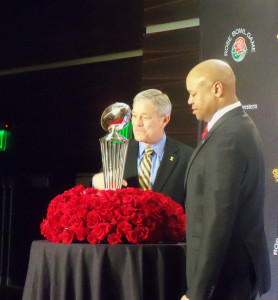 Kirk Ferentz and Brian Shaw pose in front of the Rose Bowl trophy.

Ferentz says the atmosphere could be similar to what they saw in Indianapolis for the Big Ten Championship game. “We anticipate a really enthusiastic following here, our fans have been tremendous historically,” Ferentz says.

Stanford was in back-to-back Rose Bowls in 2013 and 2014, but Coach David Shaw says that doesn’t diminish the excitement of playing in this one.

He got a laugh after being asked about the number of Iowans coming to the game and saying he expects there will be a few Stanford fans at the game too.

Shaw says being in the game more recently than Iowa won’t be any big advantage today, as it will be the same atmosphere.

“There’s an energy in the air, there’s an excitement in the air. There’s clear lines of delineation based on the apparel of which side is for which team, and both sides are energetic and passionate,” Shaw says. “I’ve run out on the field in a couple of big games before — there’s still nothing like running out on the field in the Rose Bowl.” He says it will be the same for the players, they will feel the emotion of the stadium and the moment.

Former Iowa quarterback and now Big Ten Network analyst, Chuck Long knows what it will be like when Iowa’s C.J. Beathard goes under center to take a snap for the first time in the Rose Bowl.

“It’s an adrenalin rush, he’s going to feel that adrenaline rush, he’ll feel it in pre-game warmup, that’s when you start to feel it with the crowd coming in, and just the scene from the Rose Bowl floor is not like any other nationally,” Long says. “He’s a first year starting quarterback going to a big bowl game, not like my case where I started off with the Peach Bowl…and then the Gator Bowl and the Rose Bowl.”

But Long expects Beathard to handle that initial adrenaline rush and play well. “Just being around him, he’s going to handle it well. He’s got great demeanor, he’s been around football all his life,” according to Long.

Former Hawkeye and now radio analyst Ed Podolack, is expecting a rugged game. He says it will be similar to the game with Michigan State where both teams will try to make the other give up. “There’s not going to be too much in the way of fancy football, it’s going to be who wants it, who has trained the best. So, I think it ends up being an exciting type of football for me to watch, because it is blocking and tackling,” Podolack says.

He say his one big concern is the return game of Stanford. “At times I think we have been inefficient at punting the ball this year. I don’t think that you can punt the ball to their team and not expect to get hurt,” Poldolack says.