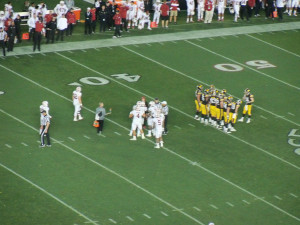 The Iowa Hawkeyes’ hopes of adding win number 13 to their already record season total disappeared quickly in a 45-16 loss to Stanford in the Rose Bowl Friday.

Stanford running back Christian McCaffrey caught a pass on the first play from scrimmage and ran 75 yards for a touchdown just 11 seconds into the game. That touchdown was the first of five touchdowns in the first two quarters that put Iowa in a Rose Bowl hole they couldn’t overcome. 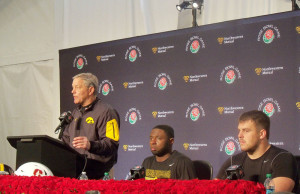 Iowa coach Kirk Ferentz talked with the media after the game.

“We’re all disappointed in the outcome of the game today, the way we played. But that being said, I just say it one more time, just how proud I am of our football team,” Ferentz said.

“They’ve been a tremendous group all season long. Thirteen times they’ve prepared well, they’ve competed hard, and today just didn’t work out for us. Obviously, very, very proud of the way the guys have done things, and that really goes back 12 months. So this game hurts. We’ll learn from it. We’ll move on.”

Ferentz said the overall experience outside of the game had been great, and he thanks the thousands of fans who made the trip, and credited the seniors for their role.

“I can’t tell you or describe in terms just what a great job they have done going back to last January. These guys have walked the walk on a daily basis. They’ve done a tremendous job of providing leadership for everybody on our football team, and these guys are the main reason why we made history this year,” according to Ferentz. “So really appreciative of all their efforts. Certainly wish all of them the best as they move forward, and I know they’re going to all do well, and our team will move forward as well.”

Ferentz says the opening score was tough, but it shouldn’t have dictated how they played the rest of the game. “In the first place, it was a big play certainly. We had a similar situation to that in 2009 at Penn State. They hit an 80-yard pass on us right off the bat. But we came back ask won the football game,” Ferentz said. “Just like this game won’t define this team. One play doesn’t define a game. We had ample opportunity after that to play. But to put it on that would really diminish the way they played. They played a tremendous game in all phases.”

Senior center Austin Blythe says they started the game out too slowly. “We just didn’t get it going offensively. And Stanford played a good defensive game obviously, and we didn’t get anything going until the end there. And at that point it was too little way too late,” Blythe said.

Stanford’s McCaffrey scored on a 63-yard punt return and broke the Rose Bowl record for all-purpose yardage in the game. Ferentz was asked if McCaffery was better in person than he was on film. He said they don’t have anyone in practice who can duplicate the things that McCaffrey does.

“He’s a rare talent. He’s a tremendous football player, great balance, great vision, very difficult to tackle. So, you know, it’s just a real credit to him,” Ferentz said. The punt return for the TD was the first Iowa had given up all season, as was a first-quarter pick six thrown by quarterback C.J Beathard, as everything in the game seemed to go wrong for a team that had all the answers through most of the year.

While the loss stings, Iowa’s seniors finish with a school record 12 wins and a perfect regular season. Senior cornerback Jordan Lomax talked about what the season has meant to him.

“Just being able to play with a group of guys this year. It was a very great year for us,” Lomax said. “The togetherness and maturity within this group and the camaraderie and just being able to play under Coach Ferentz and the rest of the coaching staff has just been a huge honor. Couldn’t thank this university, our fans and my teammates — they’ve done so much for me, and it’s just been an awesome year.”

Blythe said he agreed with Lomax. “It’s been an unbelievable year with the group of guys we’ve got. Everybody working towards a common goal, working together. There was nobody standing off on the side doing their own stuff. Like Jordan said, just playing for these fans, this university and for a coach like Coach Ferentz is second to none,” according to Blythe.