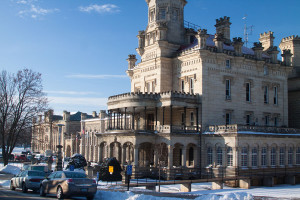 Matthew Eivins, spokesperson for the Anamosa State Penitentiary, says it happened shortly after 5 p.m. in the facility’s LUB Living Unit.

“An emergency code went out that an officer was being assaulted and of course our CERT (Correctional Emergency Response Team) responded as quick as possible and gained control of the offender,” Eivins said.

Although the Department of Corrections is calling the incident a “serious assault,” the officer was not seriously injured. “He did received injuries about the face and head area. Of course, we take all injuries serious, but they were not life threatening,” Eivins said. The correctional officer was transported to Jones Regional Medical Center, where he was treated and released.

The prison inmate accused in the attack is identified as Taylor Denney. Eivens says Denney will be housed in an administrative segregation unit while the incident is under investigation. Denney is serving a 15-year sentence for second-degree arson, escape of a felon, and voluntary absence/escape from Des Moines County. His prison sentence began in February 2010.