You are here: Home / News / ‘This is the way democracy ought to work,’ Bill Clinton says of Iowa Caucuses 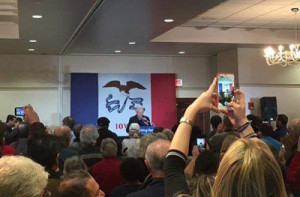 Former President Bill Clinton is campaigning in Iowa today, encouraging Iowans to Caucus for his wife.

Clinton told a crowd of about 500 in Cedar Rapids that Hillary Clinton needs their help.

“I like this. You have to look people in the eye and talk to them. You have to have discussions and arguments, but this is the way democracy ought to work,” Clinton said. “It’s harder to side-swipe somebody with a 30-second ad in Iowa.”

As he did earlier this week in New Hampshire, the former president argued that among the candidates running for president in 2016, his wife’s “temperament” is best suited for the Oval Office.

“She can find common ground and then, as we saw in that 11-hour Benghazi hearing, she can stand her ground pretty well,” Clinton said and the crowd cheered.

Clinton has accompanied his wife on the Iowa campaign trail over the past several months, but this was his first solo appearance in Iowa and he gave a speech loaded with details about her resume.

“If you look at the economics, the social policy, the political policy and the national security capacity, I don’t think it’s close who the next president would be if you’re making a decision on the merits,” Clinton said and the crowd applauded.

Clinton walked through the “NewBo City Market” in Cedar Rapids late this morning and reporters asked, but the former president said he had “no interest” in weighing in on Donald Trump’s assertion that Hillary Clinton had been an “enabler” of his sexual misconduct. Bill Clinton told reporters that Trump “says a lot of things” and he is instead focused on helping his wife win the Democratic Party’s presidential nomination. Clinton will appear at another event in Dubuque this evening.