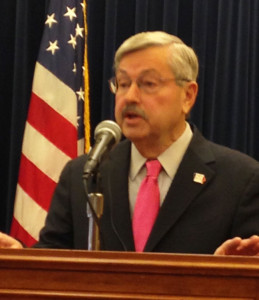 Republican Governor Terry Branstad will brag about the state’s diversified energy portfolio today during his annual “Condition of the State” message to the legislature. Branstad previewed his message for Radio Iowa during an interview in his statehouse office.

“Iowa when I became governor in 1983 was almost totally dependent on coal for our electricity and imported fossil fuels for our gasoline,” Branstad said. “Today, we produce more ethanol than we consume in gasoline.”

And, according to Branstad, Iowa is on track to get 40 percent of its electricity from wind power by 2020. Branstad said that positions Iowa to be the “greenest” state in the country.

“Industry and business wants to locate where it’s not expense, but they also like to be able to say that it’s renewable,” Branstad told Radio Iowa, “so that’s a great asset and that can be a real marketing tool for Iowa.”

Branstad recently asked Lieutenant Governor Kim Reynolds to lead a group that will draft a state energy policy and he’ll talk about that today in his speech to legislators.

Iowans have weathered a “challenging” year, according to Branstad.

“We’ve gone through the bird flu. The commodity prices are below the cost of proiduction,” Branstad said. “That’s had an impact, but despite that Iowa has today a record level of people employed.”

Branstad is calling on legislators to adopt his plan to divert some of the state sales tax money that’s dedicated to school infrastructure to water quality projects. The governor also will outline some proposals that are designed to address the racial disparties in Iowa’s prison system.

“How we can reduce the prison population through what’s already been going on with the Parole Board and Corrections,” Branstad said, “and also focusing more on rehabilitation and less on incarceration.”

Branstad will present what he describes as “lean” state budget recommendations to legislators today as well. The governor’s “Condition of the State” message will begin shortly after 10 this morning.