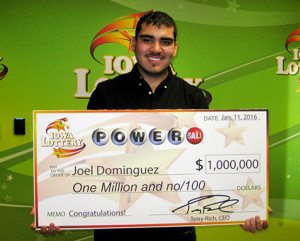 A Sioux City man has claimed a $1 million dollar Powerball prize. Joel Dominguez, 23, says he usually has a good feeling about his chances of winning a big prize, but until now, he wasn’t too lucky.

“Every time I buy tickets, I’m thinking ‘this is the one, I’m going to win.’ But, most of the times I’ve won it was just a couple bucks. The most was eight dollars,” Dominguez said Monday at Iowa Lottery headquarters in Clive. Dominquez was on the phone Saturday night with his wife, Tanya, who was in Arizona visiting family, when they learned he was holding the valuable ticket. After taxes, he’ll collect $700,000.

Dominguez said he plans to use his lottery winnings to help his family pay bills. “The most important thing is to help my family, make sure they’re o.k. and they get their needs take care of. I want to finish my education and my wife to finish hers, buy a house, and hopefully have a little leftover,” Dominguez said.

His ticket came within one number of having at least a share of Saturday’s record $947.9 million jackpot, matching the first five numbers but missing the Powerball. No one matched all six numbers that night to win the jackpot and the big prize has now climbed to an estimated $1.5 billion for Wednesday.

Dominguez is a pipefitter for Performance Contractors and has been working at the CF Industries construction site, south of Sioux City.