You are here: Home / News / Congressmen Young and Loebsack sit together for Obama speech 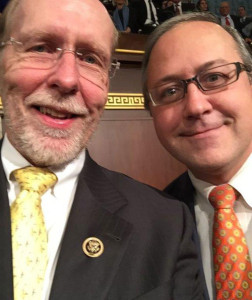 “And I want to work together, not just with folks within the delegation, but you know across the aisle and outside the state as well,” Young says.

Loebsack shares the same sentiments — and Loebsack says President Obama “hit the right note” by stressing bipartisanship in his speech.

“I think his call for unity, while it’s going to be met with no doubt a lot of skepticism on the other side of the aisle, was a really wonderful way to end it,” Loebsack says.

“I think it was a broad-strokes, fairly good speech and he was realistic about what can be happening this last year in an election season,” Young says.

Loebsack is hoping the president may have inspired bipartisan action in congress on things like additional tax credits for low income Americans and more worker training assistance.

“I think that we all agree that we have to make sure we bring as many people as possible into the middle class and the rubber’s going to hit the road when we try to figure out how best to do that,” Loebsack says.

Republican Congressman Steve King of Kiron decided not to attend last night’s speech. King released a written statement afterwards, saying he went to the private chapel in the capitol for members of congress and prayed instead for a new president “who will restore the soul of America.”

Iowa’s other congressman, Republican Rod Blum of Dubuque, was not available for comment last night.