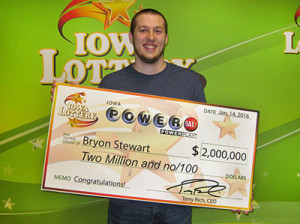 The biggest prize won in Iowa from the drawing for the world’s largest ever lottery jackpot was claimed Thursday.

Twenty-three-year-old Bryon Stewart of Onawa purchased a Powerball ticket that matched the first five numbers in Wednesday’s drawing, but missed the Powerball, for a $2 million prize.

Stewart drove to Iowa Lottery headquarters in Clive with his girlfriend, Taylor Kuhlman.  “You just never expect it, ya know, from a small town…just a normal couple. You don’t think something like this could happen, then it does. It’s nice,” Stewart said.

Stewart, who works as a security officer at the WinnaVegas Casino & Resort in Onawa, says he and Taylor were in his car Wednesday night when they looked up the Powerball numbers and realized he had won a big prize.

“We screamed, jumped, got out of the car, ran around and hugged,” Stewart said. “This was about 11:30 at night, so we probably woke up a few people, but we were just so happy.”

Stewart purchased three tickets for the drawing. Three tickets purchased in California, Florida, and Tennessee matched all six numbers drawn for a share of the $1.6 billion jackpot.

Stewart said he’s happy with the $1.4 million he’ll collect, after taxes. “I just want to pay some loans off and maybe, down the road, look for another house,” Stewart said. “The biggest thing is, I want the money to last as long as we can. I’m only 23, $2 million is a lot of money, but it’s not going to get me ‘til I’m 80. I want to make it last.”

Stewart said he will continue to work, and Kuhlman said she will as well. This marks the second time this week that a young person in western Iowa has claimed a big Powerball prize.