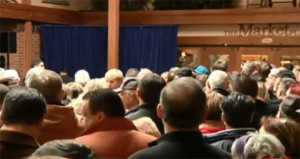 Despite the chilly temperatures, Donald Trump’s supporters started lining up before sunrise in Urbandale to see Trump this morning at the Living History Farms Visitors Center.

Tom Simsom of West Des Moines, who watched last night’s GOP candidate debate, was near the front of the line.

“I thought it was probably the most exciting debate they’ve had yet,” he said. “There was a lot of activity and energy going on. I think Trump won.”

Simson’s wife, Eve, watched the debate with her husband.

“He broke through the (political correctness)…I never thought I’d be a supporter, but this is really what got me supporting him. He’s not afraid,” she said. “He speaks out.”

Connie Polich of West Des Moines likes “everything” about Trump.

“Different,” she said, to describe Trump. “He wants change. We want change.”

She was thrilled with Trump’s debate performance.

“Loved it!” Polich said. “I loved his ‘New York values’ answer. That was so cool!”

“Trump for the first time surprised me that he was able to come back when people attacked. Usually he would just say a few words, but this time he had some pretty good comments — especially when they talked about New York values,” Simson said. “…I thought Trump did very well.”

Rich Fuqua of West Des Moines suggested Trump could have twisted the knife even further.

“I wish he would have hit it home a little better and talked about the firemen and the policemen that went into those burning buildings in New York when that happened,” Fuqua said. “That would have really got Cruz.”

Fuqua, who was earing a stocking cap and a parka as he waited in the cold this morning, plans to Caucus for Trump.

Fuqua will be a first-time Caucus-goer. There were other first-timers at the front of the line, too, along with one woman who was excited to see Trump but declined an interview because she was skipping out on work and didn’t want the boss to discover where she was.