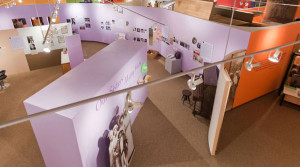 An exhibit at the African American Museum in Cedar Rapids.

The African American Museum of Iowa is giving a presentation on Martin Luther King’s life and legacy today.

The Cedar Rapids facility is also showing a documentary on the Children’s March, which was part of the 1963 Birmingham Civil Rights campaign.

While some concepts might be difficult for younger audiences to grasp, museum educator Krystal Gladden says it’s important to teach kids they can help make society more equal.

There are several other Martin Luther King Day events going on around Iowa, including a food drive in Johnson County, a food packaging event in Pella and a screening of the movie “Selma” at the Ames Public Library.

City employees in Sioux City are at work today, but next year, Martin Luther King Day will be a paid holiday. A new contract negotiated by AFSCME for the 400 city staff takes effect in 2017. Flora Lee, president of Sioux City’s NAACP chapter, says city employees working on MLK Day has been an issue for decades.

Lee says celebrating King, while acknowledging past and current wrongs, makes Siouxland stronger. “We do have to look at those inequities,” Lee says, “and if we continue to close our eyes to it, the injustices, then they continue to build and they fester and they become uglier than what they were once before.” Governor Terry Branstad declared this whole week “Martin Luther King Jr. Week.”