You are here: Home / Fires/Accidents/Disasters / Clermont man dies after his car hits a building 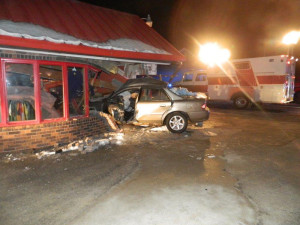 A Clermont man died and a child was injured in this accident.

A Northeast Iowa man is dead and a child injured, after a car slammed into a business in Clermont.

The Fayette County Sheriff was notified at about 5:30 p.m. Sunday, of a traffic accident on Highway 18 in Clermont.

A car driven by 38-year-old James Tackett of Clermont, went out of control and crashed into a building that houses Resale Therapy.Tackett was pronounced dead at the scene. Clermont Fire and Rescue were able to get a five-year-old girl from the back seat of the car; she was taken to the West Union hospital for treatment. Her condition was not available.

According to a preliminary information from the Fayette County Traffic Investigation Unit, alcohol may have been a factor in the accident. The 2002 Buick Century was totaled, and there was extensive damage to the business’ building.