You are here: Home / News / Senator Ernst introduces Rubio, but sticks with no endorsement plan (audio) 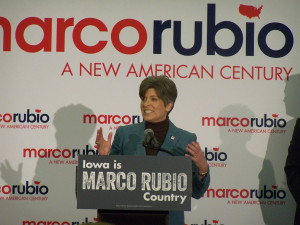 U.S. Senator Joni Ernst took to the campaign trail today to introduce fellow Republican Senator Marco Rubio at his presidential campaign event in Des Moines. Ernst, a Republican, urged everyone to show up for the Iowa Caucuses.

“What we want to do of course is to take a look at the candidates as they are coming across the state of Iowa. And hopefully you’ve had the opportunity to meet many of them. They are going to be out and pounding the ground, and hopefully you will be able to shake their hands and ask them questions,” Ernst says.

While she took the stage to introduce the Florida Senator, Ernst made it clear her appearance isn’t an endorsement. “I have said I am not going to endorse in this race, And that is a promise that I am going to keep to Iowa,” Ernst says. “So, I am not endorsing, but I do want to introduce and welcome as many folks to the state of Iowa as possible.” Ernst talked about the importance of Republicans winning the White House before introducing Rubio. 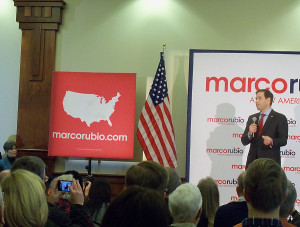 “Over the course of my time in the Senate I’ve had the opportunity to work with Senator Marco Rubio on national security. And we have had that opportunity to discuss the threats to America,” Ernst says. “And he understands those threats very well. And I know that he has the confidence necessary in a leader to contain or destroy ISIS.”

Rubio criticized Democrat President Barack Obama’s policies, and says if the leading Democrat in the race is elected, those polices will continue.”If Hillary Clinton is elected president of the United States of America, the consequences will be extraordinary,” Rubio says. “Obamacare will be here to stay. These radical executive orders that are hurting agriculture and business in American are here to stay. If Hillary Clinton is elected president, the balance of power on the Supreme Court will be changed for the next two decades and beyond.” 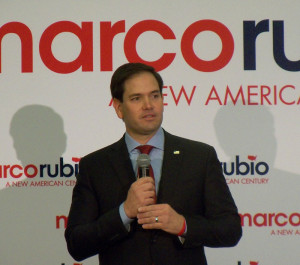 Rubio talked about the importance Iowa has in the process. “In a week from now, this state and all of you hopefully will attend a caucus. And it will be the first time that any Americans begin to answer the question of what comes next for America,” Rubio says. “I can tell you what has come before this time. What has come before this time is an amazing story unlike any in all of human history. For 200 years — over two centuries — this has truly been an exceptional country, unlike any in the world.”

Rubio’s parents came from Cuba to the U.S. and he mentioned Ernst several times as he talked about the opportunities that American has offered. He retold a story that Ernst used during her Senate campaign.

“She did not grow up in privilege. In fact, her parents didn’t make a lot of money — like mine didn’t — and so at one point you only had one nice pair of shoes Joni? And so what her parents would do, is they would wrap those shoes in bread bags to make sure that they wouldn’t get ruined if it was raining or snowing on the way to the bus,” Rubio. He says the greatness of America allowed Ernst to go from where she started to become a U.S. Senator.

Rubio says his story is the same and says he parents were also able to make a good life. “They were never rich, they were never famous, and you never would have heard of them had I not run for office,” Rubio says. “But my parents were successful people. Because just a generation removed from poverty and despair, they achieved here what would have been impossible in the nation of their birth.”

Rubio says he is the candidate that can ensure that the U.S. continues to be that country where anyone can achieve, not matter what background they come from.