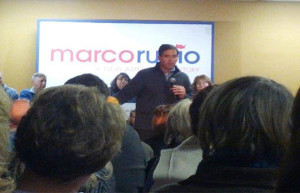 Rubio told the crowd he is the Republican best equipped to counter the messages of Hillary Clinton and Bernie Sanders.

Rubio, who is 44, attended Tarkio College in northwest Missouri for a year on an athletic scholarship, then completed his undergrad work and went to law school in Florida. He’s been a U.S. Senator since 2011 and touts his approach to foreign policy issues. Rubio said President Obama is wrong to describe ISIS as “twisted souls” riding around “in pickup trucks”.

“ISIS is the best-funded, best-organized and most sophisticated radical jihadist group in the history of the world,” Rubio said in Oskaloosa this morning.

Rubio is promising stricter screening measures that would keep suspected terrorists from entering the country as refugees.

“It’s a very straightforward requirement,” Rubio said. “When I am president, if we don’t know 100 percent for sure who you are or why you’re coming, you are not going to get into the United States of America.” R

Rubio spoke for about half an hour, then answered questions from the crowd. Oskaloosa was the first of three stops for Rubio in Iowa today. Six other Republican candidates are campaigning in the state today. Democratic presidential candidates Bernie Sanders and Hillary Clinton are here as well. Clinton will be in Marshalltown this evening for an event that’s to start a couple of hours after Donald Trump rally in Marshalltown is set to end.