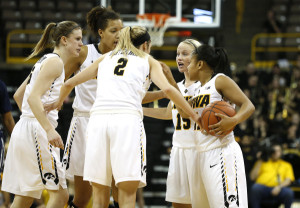 Iowa women’s basketball coach Lisa Bluder says the Hawkeyes are not waving the “white flag” on their NCAA Tournament hopes. After racing out to a 12-2 record to start the season the Hawkeyes are in the midst of a three week slump that has seen them drop five of six games heading into Thursday night’s game at home against Michigan.

Bluder feels getting to nine Big Ten victories would be enough to get the Hawkeyes a spot in the NCAA Tournament.

“You know you can’t say we are going to win them all and I think that is putting too way much pressure on them”, said Bluder. “But we have not thrown up the white flag. No way.”

Just a couple of weeks ago the Hawkeyes were riding a 25-game winning streak at home but have dropped their last two games in Carver-Hawkeye Arena and it was an 82-75 loss at Michigan back on January seventh that started the skid.

“Just to get any win. I don’t care if it happened on Mars right now we just need to get a win.”