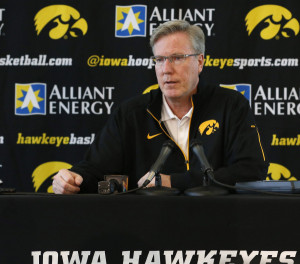 Iowa’s nine-game winning streak came to an end at eighth ranked Maryland. The Terrapins scored two quick baskets with less than a minute and a half to play to build a six point lead in a 74-68 victory over the third ranked Hawkeyes.

Iowa nearly survived a poor shooting night. Jarrod Uthoff made only two of 13 shots and as a team the Hawkeyes made only five of 24 from three point range.

“I though we fought”, said Iowa coach Fran McCaffery. “I give credit to Maryland and their defense and the fact that they outrebounded us. We have got to rebound late when we get a stop”

Per Jok led Iowa with 14 points and Adam Woodbury had 11 points and 10 rebounds before fouling out at a crucial point late in the game as the Hawkeyes fall to 7-1 in the Big Ten. They return to action on Sunday by hosting Northwestern.