You are here: Home / News / A sprint to the finish as 2016 Iowa Caucuses draw near (video) 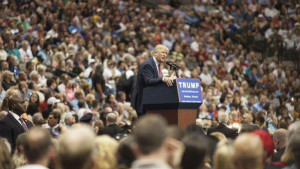 Thirteen presidential candidates held 38 events in Iowa Sunday. There will be another 28 campaign events today — as the rush to seven is on. The Iowa Caucuses begin at 7 p.m.

Rival Ted Cruz is counting on the organization he’s built to send him into first place. “Take a look around you,” Cruz said last night in Des Moines. “The strength of this campaign is over 12,000 volunteers here in the state of Iowa.”

On the Democratic side, Hillary Clinton held a slim lead in the final “Iowa Poll”. Her final event on Sunday was at a Des Moines high school. “And I want to keep making this case until the Caucuses are over,” Clinton said, “because I feel so strongly that we cannot afford to make a mistake.”

Bernie Sanders calls the race a “toss up” and he spent his weekend holding rallies and meeting with volunteers in places like Manchester and Waterloo.

“This looks like a group of people ready to go to the barricades,” Sanders joked in Waterloo and the crowd cheered.