You are here: Home / News / Des Moines airport prepares for snow and flights out after Iowa Caucuses 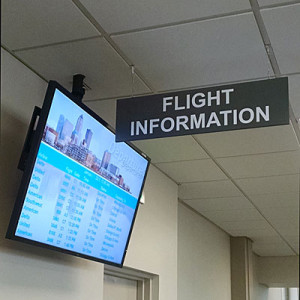 The airport in Iowa’s capital city will be much busier than normal Tuesday morning as national media and others who’ve flocked to the state for the caucuses make their way back home or head to New Hampshire.

Kevin Foley, executive director of the Des Moines Airport, says they started planning for the boom in business about six months ago.

“The airlines have agreed to bring in larger aircraft and TSA will have additional screening staff on duty to ensure that the screening lines are as short as we can make them,” Foley said. In addition, the car rental companies around the airport plan to have extra staff on hand to handle a large influx of vehicles.

The approaching winter storm, expected to arrive in the Des Moines area overnight, could complicate matters. Foley said the airport has plenty of equipment to clear any amount of snow. “The one thing that I’m positive of is that the airport will be open and the runway will be available for any aircraft to arrive or depart,” Foley said. “What concerns me is the things I don’t control…and that is the weather.”

Although the airport will be open, Foley said there’s no guarantee that the airlines will be operating at a full schedule. He notes most of the presidential candidates have charter flights and will be leaving either late tonight or very early tomorrow, before the storm hits.