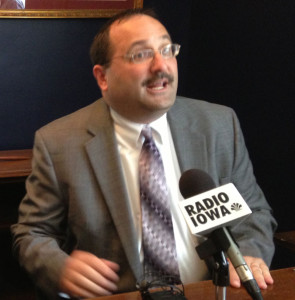 “It went way beyond, way beyond what we ever dreamed we were going to have,” says Iowa GOP chairman Jeff Kaufmann.

More than 186,000 turned out for the Republican Caucuses.

Kaufmann says he was “taken aback” when reports started coming in about long lines at precinct sites around the state. Entrance polling indicates 43 percent of the people waiting in those lines were first-time Caucus-goers.

“As I now transition from caucus into preparing for the General Election, you know, it’s just a gold mine,” Kaufmann says.

The party will “immediately” try to communicate with those first-timers.

“That doesn’t mean you hit them up for money or turn them into Mr. or Ms. Republican of the Year,” Kaufmann says. “You begin, essentially, a dialogue.”

Some of those new voters are supporting just the one candidate at this point, according to Kaufmann, but he says it’s important to start a conversation that may keep those new voters in the Republican fold in November.

More than 170,00 Iowans participated in the Democratic Party’s caucuses last night and the Iowa Republican Party’s chair is praising them, too.

“I can’t tell you how proud I am,” Kaufmann says. “…We showed the entire world not only that can we take a broad leap in sophistication and technology in how we carry it out, but the methodical way that we did it — I’m just so proud of this state. I really, truly am.”

Kaufmann’s comments are directed to the “rank and file” Republicans and Democrats who participated in the Iowa Caucuses. Kaufmann says he wishes his counterpart “the best of luck” in dealing with critics who question the way the Iowa Democratic Party handled last night’s results.