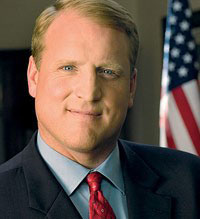 Former Iowa Governor Chet Culver is responding to criticism of current Governor Terry Branstad on Culver’s meetings scheduled in eastern Iowa to discuss the privatization of the Medicaid program.

On Monday, Branstad accused Culver and Senate Democrats of politicizing the issue. Culver says he wants to help people who have questions about the issue.

“Well before my involvement in this matter, Governor Branstad’s risky Medicaid privatization scheme had already started taking on water fast and, in public opinion, was sinking fast,” Culver says. Culver is holding town meetings on Medicaid privatization today in eastern Iowa. “I am working with advocates across Iowa representing more than 560,000 Iowans on Medicaid — including 120,000 with disabilities — to make sure their voices are heard, regarding this bad public policy,” Culver says.

The Republican Branstad, defeated Democrat Culver in 2010, and said Monday that the Medicaid program was in jeopardy when he took office and he had to dig it out of a “big hole” that Culver created.

“Governor Branstad repeatedly has mislead Iowans on the budget. I earned a Triple-A bond rating. We left a surplus of 750 million dollars,” Culver responds. “And we also worked hard to have one of the best Medicaid programs in America. And that’s what’s important, that Iowans who need it, get the care that they deserve.”

Culver says the issue needs to be discussed. “This is not about partisan political shots. It’s about an honest debate on an important public policy matter that is impacting more than a half million Iowans. And that’s why I am getting engaged in this,” according to Culver.

Culver issued a statement that lists several other concerns about the Medicaid privatization, including:

Culver is holding his meetings at 10 a.m. at the Coralville Library, and at 2 p.m. at the Cedar Rapids Library.

Culver lives in West Des Moines and is the founder of the Chet Culver Group, which is described as “a renewable energy and infrastructure consultancy that works with individuals and public and private sector entities to provide strategic consulting, cut through red tape and promote cutting-edge ideas that will move the country forward.”