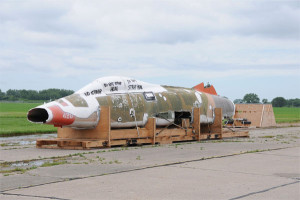 A team of specialists in Sioux City has helped save an F-100 jet fighter from the airplane graveyard, and it will soon be on display at the Air National Guard Headquarters in Maryland.

Colonel Larry Christensen is commander of the 185th Air Refueling Wing where the paint shop specializes in refinishing some of the nation’s most distinguished combat aircraft; F-15s, F-16s and the A-10 “tank killer.”

“We’re over 600 airplanes right now and once you add up the savings on each one of them that gets to be a huge savings for the country,” according to Christensen.

Dave Miller manages the paint shop and a team of 13 corrosion control specialists.”Aircraft will come through our facility and they will get sanded, primed and repainted. The whole purpose is to keep the corrosion at a minimum, or nonexistent, and that way it keeps the aircraft structural integrity intact and always mission ready,” according to Miller.

Wing Commander Christensen says the unit has saved more than 50 million dollars through efficiency. “It’s cheaper because we’ve been doing it a long time, we’ve figured out quite a few things to speed the process along, get it painted, get it back to where it needs to be, flying missions,” Christensen says. 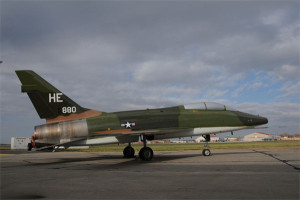 A surprise project arrived in Sioux City last June — a legendary F-100 Super Sabre jet fighter — which was the first Air Force fighter to break the sound barrier. It was rescued from the Arizona desert where she was retired in 1977.

What’s more, this particular two-seater, with tail number 880, was based in Sioux City in the 60s and 70s. For one Iowan in particular, preserving 880 is sentimental. Former Major Norman Schaap from Sioux Center was the last man at the controls of 880 on its final flight to the aircraft boneyard, just as new aviation technology was introduced.

“All the airplanes today now, they’re smart,” Schaap says. “You go and punch a button and they’re smart, but the F-100 wasn’t. It was just dumb, it couldn’t think for itself. You have to fly it.” Iowa air guard pilots flew the Super Sabre in the Vietnam War when they helped locate the enemy and interrupt supply lines.

The restoration of number 880 is now finished, and spectacular; wearing a new coat of multi-colored camouflage. Its final mission will be atop a pedestal for display at Andrews Air Force Base, outside Washington.