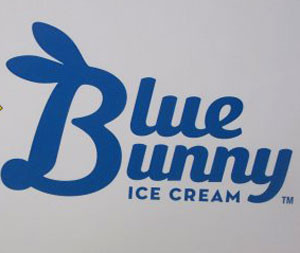 The Le Mars-based company that makes Blue Bunny ice cream has changed its logo and packaging.

The new logo, which features a cursive letter “B” with rabbit ears and a cottontail, was unveiled this week. Well’s Enterprises, spokesperson Liz Croston, says the idea behind making the change is to have ice cream be fun.

“Ice cream is fun, and when you walk down the ice cream aisle and you are looking in the cabinet you want something fun,” Croston says. “Because who doesn’t smile when they are eating ice cream? So that’s really what drove our work on our end, what can we do to bring fun back to the category of ice cream.”

In addition to the new logo, Wells will now be using a mascot ambassador character for its advertising and marketing. The character, known as “Blu”, appears to be a live rabbit, but actually is a computer generated image.

She says he is a “fluffy bunny who likes to have fun,” and will be featured in all of their advertising. Croston says they are also changing the packaging to make it so people can see the ice cream through the container.

“People want to know what they are getting. They want to know that they are making a purchase that they are going to feel great about when they get home and take that lid off,” she explains. “So, lets show them, that’s where that transparency came in.” Croston says consumers will begin seeing the new logo and transparent packaging almost immediately.
(Reporting by, Dennis Morrice, KLEM, Le Mars)