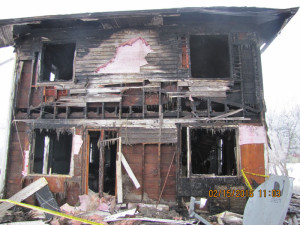 A fire at this North English home claimed the life of 25-year-old Austin Watson Sunday.

As many as 15 people have died in fires across Iowa during the first six weeks of this year, twice the statewide death toll compared to last year.

Ron Humphrey, spokesman for the State Fire Marshal’s office, says bitter cold weather was a factor in many of the deadly fires.

“That was the case in the Boxholm fire, where it was extremely cold, so (the family was) using extra heat sources in the house, which then led to the fire, which led to the firefighters out in that extreme cold,” Humphrey says. “It’s hard on humans, it’s hard on equipment, it’s a perfect storm. It was hard to fight that fire with everything involved.”

Humphrey says smoke detectors were discovered in the rubble of nearly every fire, but most had no batteries or were otherwise not functioning.

“It’s kind of sad when you go into these fatalities and you see a smoke detector there that had a battery and you wonder, would that have made a difference, or there was no smoke detectors in there,” Humphrey says. “That can be very frustrating.”

Humphrey says half of the fatalities occurred in just two fires during January. Three people died in a home in Montrose in southeast Iowa, while a mother and her three children perished in a fire in Boxholm just south of Fort Dodge.