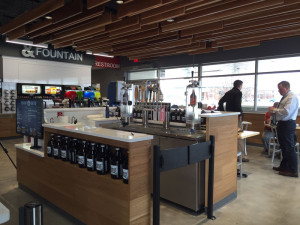 The new growler station at the Kum & Go in Johnston.

A convenience store in a suburb of Des Moines is believed to be the first in the state to offer craft beer on tap.

Kristie Bell is a spokesperson for the Iowa-based convenience store chain. “Some of the (beers) are from Iowa breweries,” Bell said. “They can fill up growlers and take home that fresh beer.”

A law passed by state legislators last year allows convenience stores to sell the glass jug-like containers known as growlers. The bottle has a handle and typically holds 64 ounces of beer. Kum & Go worked with a company in California to design the growler station at the store in Johnston.

“So, there’s an enclosed container that the growler goes in to get it filled and there is a heating element that seals on the lid after it’s been filled,” Bell explained. The growler station is part of what Kum & Go is calling its new Marketplace design — stores with kitchens, indoor seating, and patio seating outside. Kum & Go plans to include growler stations in other new stores constructed around Iowa, with the next one coming to Waukee this spring.

“Any new store in Iowa that we’re building that has the Marketplace store prototype design will have a growler station,” Bell said. While shoppers are not allowed to drink the growler at the store, they can try samples of the beers on tap. Three of the eight taps in the Johnston store feature Iowa breweries.