You are here: Home / Fires/Accidents/Disasters / Melting ice on Iowa rivers could lead to flooding 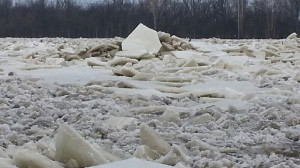 Ice jams could become a problem with warmer temperatures.

Many Iowans are celebrating today’s unseasonably warm weather, as highs climb into the 50s and 60s across much of the state, but forecasters warn that all of the melting snow could quickly become a problem.

Jeff Zogg, a hydrologist at the National Weather Service, says there’s a growing risk for ice jams and flooding on many of Iowa’s rising waterways.

“Especially the northern third of the state, mainly from Highway 20 northward,” Zogg says. “There are locations where there is significant ice cover and it’s several inches thick on some of the rivers. There may be localized ice jams which may result in localized flooding.” As large chunks of ice melt, break away and float downriver, they often get caught up on bridges, stack up and create a dam, which leads to flooding.

“Some of the more problem rivers across northern Iowa include the Des Moines River, especially in the Fort Dodge area,” Zogg says. “We have historically had ice jam issues and flooding there, as well as some locations on the Iowa and the Cedar River. Even the smaller streams, we’ll have to watch. Because the stream levels were so high during the freeze-up, it won’t take as much of a rise to cause minor flooding.”

While today’s temperatures are spring-like, Zogg reminds, we still have a little over a month of winter, so don’t put your parka in storage just yet.

“We’re expecting to lose quite a bit of the snowpack across the state over the next couple of days due to the abnormally high temperatures we have forecast,” Zogg says, “but we have had snowfall across Iowa as late as April and even May in a couple of locations, that’s the extreme. We’re definitely not out of the woods yet in terms of snowfall.”