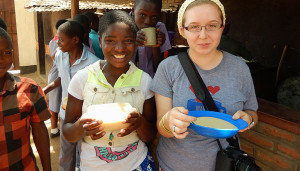 Allison Ockenfels (right) at the Jacaranda School in Blantyre, Malawi.

Two eastern Iowa youth are being recognized as part of a nationwide program honoring young people for outstanding acts of volunteerism.

Among the two state honorees for the Prudential Spirit of Community Awards, 18-year-old Allison Ockenfels of Wellman, has raised more than $60,000s for Mary’s Meals, a charity that feeds children at schools in developing countries.

“What I’ve done is just gone to people in our community,” Ockenfels says. “It started at our cluster parishes at our church and then people have just been so generous. This person tells their friend who has decided to donate, so it’s just the generosity of people is how I’ve done it.” Ockenfels has worked on the project since she was 12 and has raised enough money to build kitchens at three schools in the African nation of Malawi and to provide daily meals for students living in poverty there.

She’s visited two of the schools that benefited from her efforts. “I was trying to think of what it would be like to go without a meal for a couple of days and I just cannot imagine that,” Ockenfels says. “For many of the kids that Mary’s Meals feeds, Mary’s Meals is the only meal that they receive for the day.”

The other Iowa winner is 10-year-old Clare Szalkowski of Dubuque, who created “Clare Cares” to build friendships and organize projects that benefit bullied children, homeless and hungry people. One goal was to provide a “buddy bench” on her school’s playground to promote friendship and discourage isolation — and now, every elementary school in her region has a Clare Cares Buddy Bench on its playground, more than 30 benches in all.

Ockenfels and Szalkowski will each receive $1,000 and a trip to Washington, D.C. in May. They’ll join the top two honorees from each of the other states for four days of national recognition events. During the trip, 10 students will be named America’s top youth volunteers of 2016.