You are here: Home / Crime / Courts / Grassley: no hearing, no vote on Obama Supreme Court nominee 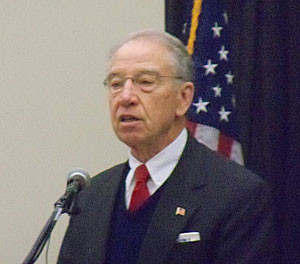 Senator Chuck Grassley and the other Republicans on the Senate Judiciary Committee have made their decision. Whomever President Obama nominates for the Supreme Court will not get a hearing or a vote in the U.S. Senate.

Grassley is chairman of the Senate Judiciary Committee. It’s the panel that holds confirmation hearings whenever a president nominates someone for the Supreme Court. Grassley and the other Republicans on the committee met privately, then released a letter to President Obama.

The GOP senators say these are “particular circumstances” and they will NOT consent to “any nominee” Obama may put forward as a replacement for Justice Scalia, who died this month. Grassley and the other Republicans say their decision is “born of a necessity to protect the will of the American people” in an election year. They say the next president should fill the vacancy on the nation’s highest court.

The Democratic leader in the U.S. Senate calls the decision “obstruction on steroids.” The Iowa Democratic Party’s executive director says Grassley is being “childish” and suggests Grassley and his Republican colleagues “have decided to close their eyes and cover their ears instead of doing their jobs.”