You are here: Home / Fires/Accidents/Disasters / Indianola medics stop and save truck driver on their way home 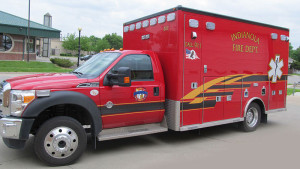 A semi driver in Iowa who suffered a medical condition might not be alive today if not for the fact that an ambulance happened to pass by shortly after the driver left a highway.

It happened Sunday evening, not far from the Des Moines airport.

Bob Soukup, spokesperson for the Indianola Fire Department, says two medics from Indianola were returning home from a Des Moines hospital following an EMS call when they came upon the semi  in the median of Highway 5.

They stopped and found the driver was unresponsive and without a pulse. “They pulled the driver onto the ground and began CPR,” Soukup said. “They retrieved equipment from the ambulance and started rescue breathing and chest compressions, with the aid of bystanders.”

The victim was in cardiac arrest and paramedic Jason Kling and EMT Kayla Schark used a defibrillator. “They were able to resuscitate the patient successfully and as they were preparing to transport him in the ambulance, he was regaining consciousness and speaking to them,” Soukup said.

Information about the semi truck driver, such as his name and age, were not released. But, Soukup said it’s expected the man will make a full recovery.