You are here: Home / Crime / Courts / After July 1, most juvenile court records in Iowa presumed confidential 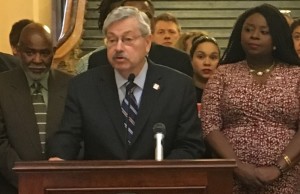 Governor Terry Branstad has signed a bill into law that will make most juvenile court records confidential. Advocates say it will help young African American men in particular turn their lives around after teenage mistakes.

Paula Morris of Des Moines said it means once her grandson turns 18, his juvenile court conviction won’t come up when he applies for a job or college.

“That is wonderful. It gives him a second chance,” Morris said, her voice cracking with emotion, “and I’m really happy about that.”

Sharon K. Brown of Des Moines is membership chair fot her local N-Double-A-C-P chapter. Brown said she and nearly everyone else who attended today’s bill signing knows a young person who’ll be helped.

“Even if an immediate family member doesn’t have a problem, you’re still reflecting because you know somebody,” Brown said. “This was a great day.”

Twenty-one-year-old Hakeem Williams got into trouble with the law when he and his mother moved from Chicago to Des Moines. He’s among a group of young activists who lobbied for the bill.

“I made some mistakes, but I learned from them,” Williams told reporters after the bill signing ceremony concluded. “I’m very elated that this bill has been passed and, finally, we have something that we can look back on and say: ‘Yes. We did it. We made history.'”

Juvenile records have been open in the past. The new law goes into effect July 1. It will make juvenile court proceedings that are underway then confidential, as well as all juvenile court convictions in the future — unless a judge rules the crime was serious and the records should be made public.

During brief remarks before signing the bill into law, Governor Branstad said a “minor offense” that someone commits as a juvenile should not “haunt them all the rest of their life.”

“The efforts of many who worked on this legislation prove that when we come together and work together, we can see good things happen,” Branstad said.

The legislation has been a priority of a working group assembled to address racial disparity problems in Iowa’s court system. Branstad told the crowd the bill is the first major piece of legislation he’s signed into law this year. The bill won bipartisan support in the legislature.