You are here: Home / News / Prison workers rally, call for increase in staffing 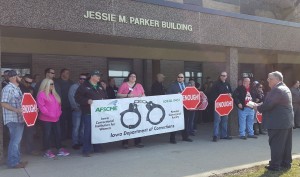 The union that represents most workers in the state’s prisons organized a rally Wednesday outside the offices of the Iowa Department of Corrections.

AFSCME Council 61 president Danny Homan is taking the agency to task over staffing levels. Homan said the Iowa State Penitentiary in Fort Madison had 570 employees in 2003, but that dropped to 394 in 2015. “We have more inmates in the Iowa State Penitentiary today than we did (in 2003), but we have almost 180 less staff,” Homan said. “The numbers aren’t adding up and people are going to start getting hurt.”

On February 24, four correctional officers at the women’s prison in Mitchellville were injured after they were attacked by prisoners in the dining hall. At the time, Homan criticized the facility’s warden for not letting the officers carry pepper spray, also known as OC spray (oleoresin capsicum).

“The department has now agreed to let them do that. Certain staff will be required to carry it and any staff that wants to carry it will also be able to carry it,” Homan said. “We also found out that the North Central Correctional Facility (in Rockwell City) didn’t have OC, so they’re going to be allowed to carry it also.”

While Homan is pleased with those changes, he believes the safety of both staff and inmates are still at risk because of reduced staffing levels in the prisons. He pointed to an incident last week at the Iowa State Pen. “We had an inmate that made a shank out of (coaxial cable)…and used it on another inmate,” Homan said.

There was also an assault recently at the prison facility in Newton, according to Homan. “An inmate was beating the living crap out of his roommate, cutting him, and threatening more harm to him if he reported it. That went unnoticed until we discovered it,” Homan said. “So, staffing is the issue. We don’t have enough staff to supervise the people who are locked up inside our prisons.”

Ben Hammes, spokesperson for Governor Terry Branstad, issued a statement saying Homan organized a rally to “misinform” Iowans. Hammes says the state’s prison population is at its lowest level since 2002 and the Department of Corrections has seen an increase in its annual budget of more than $23 million since 2011.

It’s not surprising that Mr. Homan, who serves as Vice Chair of the Democrat Party, has decided to organize a rally to misinform Iowans about the Department of Corrections (DOC) and Gov. Branstad.

The fact remains that our prison population in the state is the lowest it’s been since 2002. The guard to inmate ratio has remained virtually identical to what it was when Gov. Branstad and Lt. Gov. Reynolds took office in 2011. And finally, the DOC has seen an increase in their annual budget of more than $23 million since 2011. The governor has always worked to ensure the DOC’s annual budget has the resources necessary to protect the safety of Iowans and the Correctional officers who put their safety at risk. Simply put, the DOC receives more money than ever before and oversees the least amount of prisoners the state has seen since 2002.