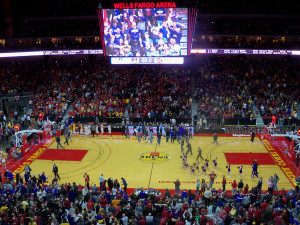 The NCAA Tournament games will be played at Wells Fargo Arena in Des Moines.

Iowa’s capital city, for the first time ever, will host March Madness this week.

The NCAA Men’s Basketball Tournament involves 68 teams and 8 of them will play in Des Moines, including top seed Kansas, Kentucky, U-Conn and Indiana.

Thousands of fans will pack Wells Fargo Arena and spend a lot of money at Des Moines area hotels, restaurants, and other businesses.

Greg Edwards, president of the Greater Des Moines Convention and Visitor’s Bureau, says the economic impact is estimated at $3.1 million, but the “Big Dance” brings more than big bucks to the city.

“There are a lot of different factors that play into it. Not only is it a huge economic impact event for the Des Moines community, it also reaches so many different parts of the country and gives Des Moines great exposure as well,” Edwards said. Des Moines will host four games on Thursday and two on Saturday.

“Wells Fargo Arena is set up to hold 17,500 for each game. The arena is sold out,” Edwards said. “We really anticipate anywhere from 15,000 to 20,000 outside visitors to converge on Des Moines over this next week.” While Des Moines has never hosted NCAA Men’s Basketball Tournament games before, Omaha has done so three times — including last year.

Edwards and other Des Moines officials attended the games in Omaha in 2015 and learned about what happens behind the scenes. Des Moines has hosted some big NCAA events in the past, including the wrestling tournament and the track and field championships.

“But, this is really the crown jewel of all the NCAA events,” Edwards said. “Our intent is to make Des Moines shine, make the fans and athletes leave here saying, ‘wow, what a great, cool place Des Moines, Iowa was,’ and our intent is to get this thing back again in the future.”

Basketball fans who don’t have tickets to the games can still catch some of the action. All of the teams will be practicing on Wednesday inside Wells Fargo Arena and all of the sessions are free and open to the public. Des Moines’ annual St. Patrick’s Day parade has been moved to avoid conflict with the basketball games.

Tournament organizers paid the Friendly Sons of St. Patrick of Central Iowa $10,000 to move the parade from Thursday to Friday at noon.

The University of Iowa, Iowa State University and Northern Iowa are all in the tourney, but are not playing in Des Moines.