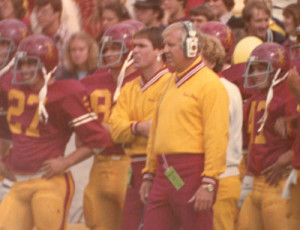 Duncan, who was 75, died Saturday after a long battle with Cancer. He was an assistant at Oklahoma when took over at Iowa State in 1979 after Earl Bruce left the Cyclones to coach Ohio State.

Duncan had an 18-24-4 mark in his four years at I-S-U, including 1981 when the team started out 5-1-1, tying fifth ranked Oklahoma and beating eighth ranked Missouri. Most importantly for Cyclone fans, Duncan’s teams beat Iowa three-sraight years from 1980-1982.

Duncan coached 10 Cyclones who earned First-Team All-Big Eight honors and two All-Americans. He left Ames after the 1982 season and later became the athletic director at Oklahoma, and then the director of football operations for the Big 12 Conference.