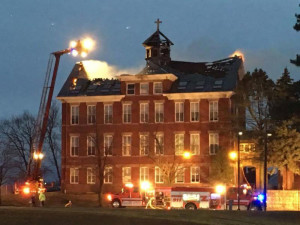 A residence hall at a northeast Iowa college was badly damaged by a fire early this morning.

Loras College spokesperson Sue Hafkemeyer says 45 students and staff who live in Visitation Hall on the Dubuque campus were evacuated around 5 a.m.

“Fortunately, no one was injured. Everyone is fine,” Hafkemeyer said. “Students have been relocated to other housing and nearby homes that (Loras College) owns.” In addition to residential housing, Visitation Hall houses Loras music classrooms.

Much of the roof of the building collapsed in the fire. Investigators believe a lightning strike may be to blame. “At this point, that is one of the things that has been speculated — that lightning may’ve been the cause of the fire, but we don’t know that yet,” Hafkemeyer said. Loras is a Catholic college with an enrollment of about 1,600 students.