You are here: Home / Sports / Woodbury crashes the glass, gets game winner for Hawkeyes in overtime (audio) 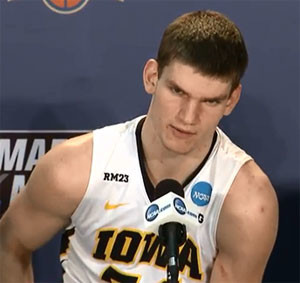 The Iowa Hawkeyes saw a late game lead melt away, but were able to get a buzzer beater in overtime to beat Temple 72-70 in the first round of the NCAA Tournament in Brooklyn, New York.

Adam Woodbury put back the Mike Gesell miss at the buzzer. Woodbury finished with 10 points and five rebounds, and talked about the last shot in the postgame.

“Coach always tell me to get on the glass every possession — so I knew if Mike got a look at it and if it was a little long I would get the offensive rebound and was fortunate enough to put it in,” Woodbury says, “just one of those right place, right time kind of deals. And I’m happy we got the win.” Iowa started the game red hot and led by 12 before Temple came roaring back.

Coach Fran McCaffery says that was the story of the game, even as they went into overtime. “You know it looked like we had it. And it’s really hard sometimes in overtime to get control. Then it look like we had control, then they took the lead. What we did do was execute down the stretch, we got great shots,” McCaffery says. While they got shots, none of them would fall, and they had to do other things to win.

“We got to the free throw line enough, and we got enough stops to put ourselves in position to get a tip in at the buzzer,” McCaffery says. Things moved quickly and McCaffery credits his team for being gassed, but fighting through it. “We had people at the table to rest guys who were already tired, and then they had to play another three or four minutes. So, our kids really fought today,” He says. 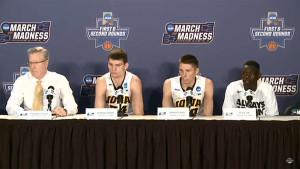 Iowa moves on to play number two seed Villanova in the second round Sunday.

McCaffery says, “Boy are they good.” He says they have a lot of weapons and that makes them hard to guard and he says his team will have to shoot the ball better.

Jared Uthoff led Iowa with 23 points, Peter Jok has 16. Iowa matched their season-low in turnovers with 3.