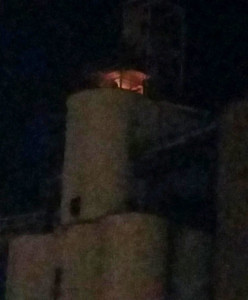 Orange flames show through the top of the elevator in Hinton.

The names have been released for two employees who were injured in a grain elevator explosion last Thursday afternoon in Hinton.

Twenty-eight-year-old Shane Noreen and 24-year-old Gustavo Gutierrez  are now reported in stable condition after being transferred to Omaha, Nebraska hospitals. The investigation continues by the State Fire Marshal and the Hinton Fire Department. The cause of the explosion is still undetermined.

The Central Valley Ag grain elevator at Hinton continues to burn following the explosion on Thursday afternoon. Through the weekend, an orange glow from burning smoldering grain could be seen from the top of the grain elevator.

Hinton Fire Department officials were on hand to monitor the situation. The decision has been made to allow the fire to burn itself out. Fire officials say the fire on the top of the grain elevator is difficult to reach, and fire officials are concerned about the safety of fire fighters.