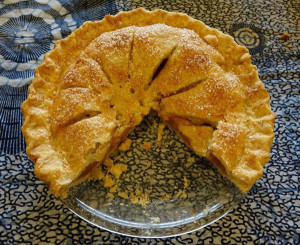 The Iowa legislature is poised to give Iowans running a baking business out of their home a chance to boost their income.

Under current Iowa law, home food establishments can only gross $20,000 a year. That’s not profit, but represents total sales of the home-made goods before any expenses are deducted.

A bill that’s likely to gain final approval in the Iowa Senate soon would raise that limit to $35,000 a year and start calling the businesses “home bakeries”.

Tod Bowman of Maquoketa drew laughter and groans recently when he asked his fellow senators to support the bill. “In this case, you can have your cake and eat it, too,” Bowman said.

Representative Linda Miller, a Republican from Davenport, spoke just before the House passed the bill unanimously this week.

“This is truly a bipartisan effort,” Miller said, “…because we all like pie.”

There are 319 state licensed “home food establishments” in Iowa today. 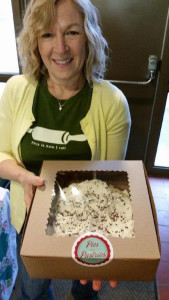 Lana Shope of Indianola has one of them. Seven years ago she won the American Pie Council’s top prize with her Harvest Apple Pie recipe.

“You could say I was the best apple pie baker in America in 2009,” Shope says, with a laugh. “But I’ve won lots and lots of ribbons at the Iowa State Fair. I love to make pie.”

So last year Shope and a business partner got a home food establishment license and their pie “coop” now has 35 customers. Another 30 people are on a waiting list because Shope can’t serve those customers due to the current state limit on sales. Shope says it’s mostly women who are trying to make money selling baked good out of their homes.

“It’s another way to support and promote small, independent businesses where people are really following a passion, doing things they love to do and pleasing people who want a more unique, fresh product as opposed to a mass production item,” Shope says, “which is kind of the trend in the world of food these days.”

Shope’s business is called “Pies and Pastries by Lana” and coop members sign up to get one or two pies a month. She bakes three times a month.

“It will take a good six hours to make anywhere from 12 to 18 pies,” Shope says.

“I like and love traditional pies, just a straight up wild black raspberry pie, but I also like to kind of push the envelope a little bit and I have a black raspberry mojito pie,” Shope says. “This week’s coop members got to choose between traditional and risky.” 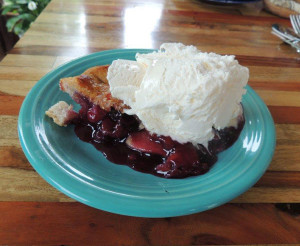 Shope ran a restaurant for 13 years, but is currently the executive director of the Iowa Community Action Association, a non-profit that helps low-income Iowans and she lobbies for the association at the legislature.

A handful of lobbyists who are members of her coop officially registered in favor of the bill.

All of the coop members get their pies in a glass pie plate. They’re asked to return the empty one when they pick up a new pie.

“We’re trying to be sustainable and the best pies are baked in glass pie pans,” Shope says. “I think you get a more even heat and I learned in my competition at the State Fair it helps you to look at the bottom to make sure your crust is completely done, so if you’re just learning and starting to bake pies, it’s a great tool to know: ‘My crust is done.'”

There’s also a secret to her crust.

“What I use in my pie crust typically is half water and half vodka,” Shope says. “The alcohol bakes out. It evaporates, so you get a flakier crust.”

Legislators considered raising the fee for the state licenses for “Pies and Pastries by Lana” and the other Iowans with home baking businesses from $33.75 to $40, but Representative Miller says they’ve opted to stick with the current fee.

“We decided the pie people could keep their $7,” Miller said.

The Iowa House voted to change the name of state licensed “home food establishments” to “home bakeries” and made some other minor adjustments in the bill, so senators will have to approve those changes before the bill goes to the governor for review.