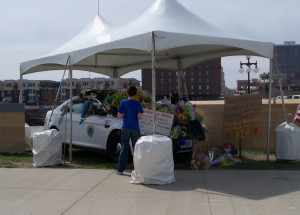 A patrol car memorial in front of the Des Moines Department is covered in flowers.

The first of two Des Moines police officers killed in an accident Saturday will be laid to rest today.

Officer Susan Farrell and partner Carlos Puente-Morales died when a car traveling the wrong way on Interstate 80 hit their police SUV head on. Farrell’s funeral is this morning at 11 o’clock.

“We’ve had phone calls from as far away as Georgia, people inquiring about the services. There’s a teletype we sent out to every agency in the nation and we’ve had a lot of response — particularly from the midwest,” Parizek says.