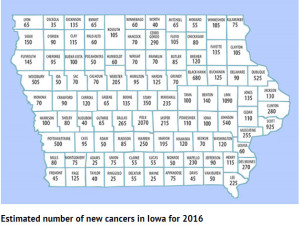 An annual report issued today estimates 6,400 Iowans will die from cancer this year, while 16,600 will be diagnosed with some form of the disease.

Mary Charlton is an epidemiologist with the University of Iowa College of Public Health.

Those aren’t the most deadly cancers in Iowa.”Breast, prostate, and colorectal are all very treatable. It’s when we get down to lung, which is the fourth most common cancer, it becomes very difficult to treat,” Charlton said. That’s why lung cancer causes the most deaths. While many cancers are decreasing in the state, skin melanoma, thyroid, and testicular cancers are on the rise.

Charlton says, in the last 75 years, skin melanoma rate in Iowans under 40 years old have doubled. “In this younger age group, I think it does have to do with UV exposure in tanning,” Charlton said. “In the older age group, especially in Iowa, we have a lot of farmers who are outdoors…and rates are actually highest in older males.”

This year’s projections mark a slight improvement from past predictions. In 2014, the report projected there would be 17,400 new cases of cancer and in 2015 the projection was for 16,900 cases.