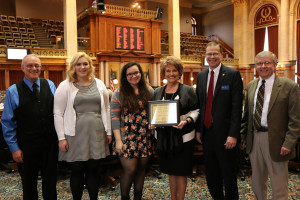 The first woman to serve as speaker of the Iowa House has won the Herbert Hoover “Uncommon Public Service” Award for 2016. House Speaker Linda Upmeyer, a Republican from Clear Lake, told her colleagues she’s stunned and honored by the recognition.

“Few things surprise you after you’ve been here awhile and there are very few secrets in this building, but I’ve got to tell you I had no clue about this at all,” Upmeyer said this morning.

Upmeyer’s family filed onto the House floor as the award was announced. She called it the biggest award she’s ever won.

“Every year when we’ve named the Hoover Award recipient I’ve always been really excited for that person because I really do believe it’s a genuine honor to receive this and, wow, I don’t know why me, but thank you,” Upmeyer said. “Thank you so much.”

Each year two legislators are honored, one in the House and one in the Senate. Republican Tim Kapucian, a farmer from Keystone, was recognized this morning (Wednesday) as well. He’s been a state senator since 2009.

“I’m so humbled and I think that everyone in here in some respect earn the same acknowledgement for their hard work and dedication to the people of Iowa,” Kapucian told his peers. “…I’m overwhelmed.”

Photos of Kapucian and Upmeyer will be posted on the wall of “Uncommon Iowans” at the Herbert Hoover Presidential Library in West Branch. Hoover was the first American president born west of the Mississippi River. He was elected president in 1928 and served one term. Hoover gained international fame for managing relief efforts in Europe after World War I.