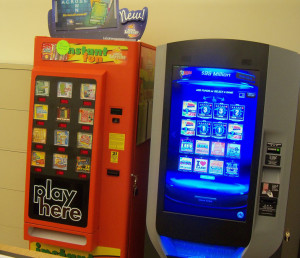 An old lottery machine on the left, and the new one that will replace it.

Governor Terry Branstad signed the high-profile bill legalizing gun silencers this past week, but the governor has approved more than a dozen other bills as well.

The new machines will let players buy tickets from any Iowa Lottery game offered, including Powerball and Hot Lotto. The machines will not provide cash winnings to players and will only be available at existing lottery retailers.

Another new state law targets identity thieves. After July 1, it will be a crime in Iowa to take out a credit card in a child’s name without a parent’s permission.

The governor also approved legislation aimed at finding untested rape kits. Authorities nationwide have discovered thousands of the kits, which contain evidence collected after someone reports a sexual assault. Iowa law enforcement agencies will be surveyed to find out if there are untested kits in storage here in Iowa.

The state has received a $2 million federal grant to conduct tests on any kits that are found and might result in a prosecution.