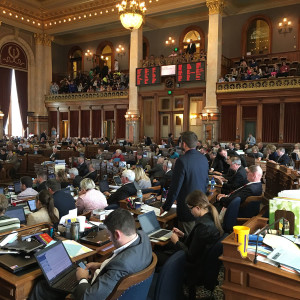 The Iowa House has passed a bill that would likely doom the proposed Rock Island Clean Line project to ship wind power generated in Iowa to Illinois.

If the bill becomes law, developers of electric transmission line projects would have three years to get agreements with 75 percent of affected property owners before Iowa regulators could give developers eminent domain authority to seize the rest of the properties.

“Every day I, in this body, am going to be loyal to the landowners rather than the pocketbooks of the Rock Island Clean Line,” Representative Bobby Kaufmann, a Republican from Wilton, said at the end of House debate of the bill.

Critics like Democratic Representative Mary Wolfe of Clinton say the bill “changes the rules” for the project “in the middle of the game.”

“That is exactly what this bill does, changes the rules in such a way as to cut this project off at the knees,” Wolfe said. “That’s not fair.”

“Quite frankly, if I was (an) outside company wanting to business in Iowa, I would be taking a good, hard look at what we’re doing today,” Hunter said.

Kaufmann angrily responded to Hunter: “This is a big day because I’ve never seen you before today defend corporate America.”

“Whose fairness right are we going to choose: property owners or an out-of-state corporation?” Kaufmann asked.

The bill passed on a 63 to 33 vote. Representative Vicki Lensing of Iowa City was among the Democrats who joined with Republicans to pass the bill.

The bill faces an uncertain future in the Iowa Senate. Opponents say it not only would derail the $2 billion construction project, but another $7 billion worth of wind turbines in Iowa.

The proposed Rock Island Clean Line would stretch through 16 counties and cover about 500 miles in Iowa.