You are here: Home / News / Branstad not willing to reveal his pick for president (AUDIO) 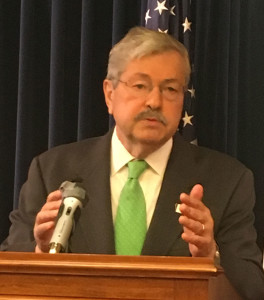 Governor Terry Branstad wants to be a delegate at the Republican National Convention this summer, but he’s not saying yet who he’d support if Donald Trump doesn’t win the GOP nomination in the first round of voting.

In that first round, the 30 Iowa delegates at the national convention in Cleveland will be required to vote according to the results of the Iowa Caucuses.

“On the second ballot, if indeed it goes to a second ballot, I intend to wait and see and find out how we in the state of Iowa can play a role in choosing the strongest possible candidate to be the next president,” Branstad told reporters this morning.

Eleven of the 12 Iowa GOP delegates elected this weekend have pledged to back Ted Cruz in the second round, a crucial victory as Cruz positions for a possible contested national convention. Branstad, who has not publicly endorsed a candidate, is hoping to be among the 15 other Republican National Convention delegates elected at the Iowa GOP’s state convention May 21, but Branstad will not reveal his presidential preference until the state convention.

“I’ve been around in this business for a long time and I’m respectful of the process that we go through,” Branstad said. “And I intend to work with the delegates and I’ll wait until we get to the convention to answer that question.”

In January, before the Iowa Caucuses, Branstad said he wanted to see Cruz “defeated” because of Cruz’s stand on ethanol. Trump has said the party’s delegate selection process is “rigged” and “corrupt”. Governor Branstad expects changes in the way Republicans pick their president in 2020.

“The process has evolved to the point where now I think the public more and more feels needs to be democratic with a small ‘d’ so that it really reflects the will of the people that participate and vote in caucuses and primaries and caucuses,” Branstad said during his weekly news conference. “And I believe the parties need to modernize and adjust their rules as time goes on.”

But Branstad added that candidates in both major political parties “have to live by the rules that are in place now” for the 2016 campaign.

AUDIO of Branstad’s weekly news conference (questions on this topic start at 22:00 mark)