You are here: Home / Sports / NCAA denies Ott’s bid for a fifth year 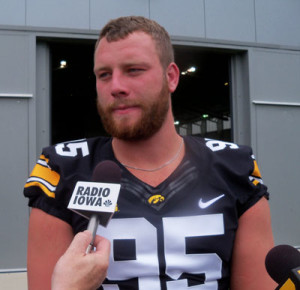 The NCAA has denied a bid by Iowa defensive end Drew Ott to return for a fifth year. Ott suffered a dislocated elbow in a week two victory over Iowa State and then had his season ended by a knee injury in a week six victory over Illinois.

He had applied for a medical hardship.

Iowa officials had expressed frustration with the lengthy process but expressed optimism after the Big Ten passed Ott’s case to the NCAA.

Ott was denied because he played in more than 30 percent of Iowa’s games last season. With the decision in his focus turns to the NFL even though the draft is just a couple of weeks away. He has hired an agent and hopes to land with a team.

“I am really excited to play football next year whether it was going to be here or another team. I just need to rehab and I should be ready to go by the start of the season.”