You are here: Home / Crime / Courts / Lawsuit seeks to stop eminent domain use for Bakken pipeline 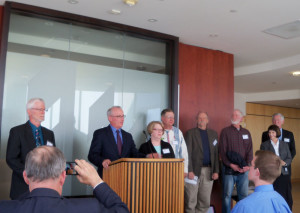 The lawyer for a group of 9 landowners who have filed suit against the Iowa Utilities Board seeking to block the Bakken oil pipeline from coming through their land spoke with the media Wednesday.

Attorney Bill Hanigan of Des Moines says they want to overturn the IUB’s decision to allow pipeline builder Dakota Access to take land when the landowner doesn’t want to sell.

“This lawsuit is about whether Iowa law allows a private company — which provides no service to anyone in Iowa — to use the state’s power of eminent domain over farmland,” Hanigan says. Hanigan says they believe a 2006 law passed by the Iowa Legislature, vetoed by then Governor Tom Vilsack, and then passed on an override by the legislature prevents this type of eminent domain use. 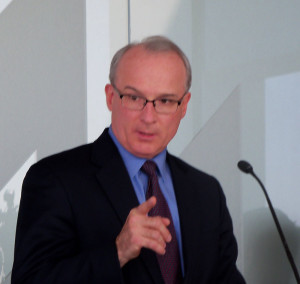 Supporters of the Bakken pipeline say there are already other things flowing through the state in pipelines, but Hanigan says the highly explosive oil is different. “One thing that all of those substances have in common for example, is that all of them are in a consumable form. And they are all subject to a defined territory within the state,” Hanigan says. “Here you’ve got crude oil — which is not consumable in its present form — and not only are there no territories for Dakota Access within the state, and there’s no customers within the state.”

Hanigan says the suit involves landowners in nine of the 18 counties where the pipeline would cross Iowa. He says their goal will be to seek injunctions against Dakota Access using eminent domain in each of the counties. Hanigan says this suit does not take into account any of the environmental or other issues raised in hearings on the pipeline — focuses solely on not allowing land to be taken from landowners who do not want to give it up.

“We’ve got no objections to Dakota Access building its pipe where it has a voluntary permit once they get final approval from IUB We think that we are going ultimately going to prevail about eminent domain over farmland —  at which time they’re going to have to have a different strategy,” Hanigan says.

Dakota Access says it has around 85 percent approval from the landowners along the route. Hanigan says they know what they are up against in this legal fight. “We understand very well that this is a David and Goliath undertaking,” Hanigan says. “Although we are the Davids. We are many.”

Hanigan says many landowners outside the ones who are in the actual pipeline route are supporting them. He expects other lawsuits to be filed on other issues involving the pipeline, such as the environmental concerns. He says the Polk County District Court will have to wait about 40 days to allow anyone else who wants to get involved in the lawsuit to speak up, so it won’t be heard until this summer.