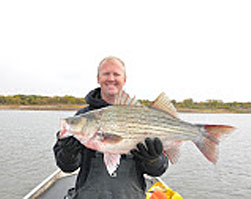 Anglers have a lot of tall tales about the fish that got away, while the Iowa Department of Natural Resources is taking a scientific approach to actually calculate the number of fish which escape from some bodies of water.

DNR research biologist, Rebecca Krogman, says their focus is on the thousands of hybrid striped bass and muskees that are stocked into lakes.

“Most of the lakes that we call lakes in our state parks are actually reservoirs,” Krogman says, “and the thing about reservoirs is that they have spillways. And we spend a lot of money and a lot of time growing fish in the hatchery — raising them up and stocking them out into all of these reservoirs — and a lot of times, we actually end up losing those fish over the spillway.”

Krogman says when the water gets high after big rains, it’s believed 90 percent of the fish that approach the spillway end up going on over. “This is a pretty widespread problem that we have. We don’t really know how bad it is, but some of the research that we have done at Lake Rathbun, at Brush Creek at Big Creek, shows us that it is really pretty darn bad,” Krogman says.

The DNR partnered with the U.S. Army Corps of Engineers and local fishing groups to put up a barrier at the spillway on Big Creek in Polk County. Krogman says the fish barriers can be electrical, physical or visual like flashing lights. “The goal of these fish barriers is to basically block off the spillway or repel fish away from it, so that they don’t end up flowing over,” Krogman says. She says the barrier cost around $8,000 in materials and labor, and they are now trying to figure out how successful it has been in keeping the fish from fleeing.

The Big Creek barrier is a fence, and she says it has to be cleaned of debris, and with the cost of putting it in and maintaining it, they want to be sure it is working. They’ve already installed special tags in the walleye they’ve stocked to track the fish with special readers at the spillway in a project along with Iowa State to track the fish. 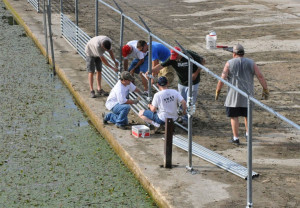 Building the fish barrier on the spillway.

“Whenever it gets pinged, it will ping back its I.D. or its name for that individual fish,” Krogman says. “And then we have a PIT tag reader (Passive Integrated Transponder tag reader) installed on the spillway. And so, whenever a tagged fish comes near that spillway or goes through it — we can get that I.D. number and know if that fish went through and went over.”

They also have automated readers on the Brushy Creek Lake spillway which does not have a barrier. It is serving as a control lake for the research. Krogman says the second part of the project is trying to raise money on the experiment.com site to buy the tags to put in the stocked hybrid striped bass, which are also known as “wipers”

“We’re trying to raise money as fast as we can. Our goal is a little bit under $5,000 to buy all the PIT tags. About a week before the end of it, experiment.com is going to compare all of the fish projects to see who has gotten the most support, and then they are going to add another $1,500s to that experiment’s project,” according to Krogman.

She hopes Iowans and others interested in seeing these trophy fish stay home will donate to the project. You can go to the site and look for the project called “Where did the wipers go?” to donate. There are 22 days left before the winner of the additional funding is decided.